Black seed is from Nigella sativa, a flowering plant native to southwest Asia and the Mediterranean which now grows throughout India, the Middle East, Europe, and Northern Africa. Black seed, also known as black cumin and black caraway, has been used for centuries in herbal medicine to treat various health conditions including headaches, toothaches, infections, and respiratory issues like asthma and bronchitis. Today, it is used to treat digestive issues like diarrhea, constipation, and hemorrhoids, allergies, and respiratory conditions, and to manage blood pressure, cholesterol levels, and immunity. Black seed has a strong aromatic flavor, smoky taste, and crunchy texture. It is often used in savory dishes like curries, soups, and stews, and when baking breads and pastries.

Buchu is derived from the Agathosmaspecies of plants which grow in the Cape region of South Africa. The buchu, or the oils released by their leaves, are traditionally used for a broad spectrum of medicinal purposes. Research is limited on the significance of buchu’s health effects, but it is most notable for its treatment of kidney and urinary tract infections because of its antimicrobial activity. Buchu is used to make herbal teas, tonics, and over-the-counter diuretics. It is also speculated to have anti-inflammatory, antiseptic, antispasmodic, and digestive effects.

Buchu is mainly used by South Africans but is sold commercially in the United States. The buchu leaves can be used to make tea or brewed in brandy; and are commonly used to make oils. The buchu plants produce different scented oils that resemble peppermint and range from sweet to sharper smells. Its strong scent and taste are used to boost fruity flavors, but the most impacted is the flavor of black currant. The oil can also be used as an insect repellant, deodorant, or moisturizer.

Chamomile is an herb that is prepared from the dried flowers of the Matricaria plant. These dried flowers contain terpenoids and flavonoids contributing to its medicinal properties. Chamomile preparations are commonly used for a variety of human ailments such as hay fever, inflammation, muscle spasms, ulcers, gastrointestinal issues, rheumatic pain, and hemorrhoids. It is also used to manage anxiety and insomnia, due to its calming effect. This makes its dried leaves a perfect brewing agent for nighttime teas. Chamomile flowers also produce an iconic blue oil that is used extensively in cosmetics and aromatherapy. Its scent is mild with hints of apples and can be described as sweet and smoky. Essential oils of chamomile are used topically to treat wounds and also can be mixed into perfumes, cosmetic creams, hair products, lotions, toothpaste, and even in liquors.

Due to its wide range of healing properties, chamomile has been used in herbal remedies in Egypt, Greece, and Rome for thousands of years, and it was even believed by the Anglo-Saxons to have been one of nine herbs given to humans by the lord. The chamomile plant is grown mostly in Egypt and southern and eastern European countries, but also in India, Asia, North and South America, Australia, and New Zealand. 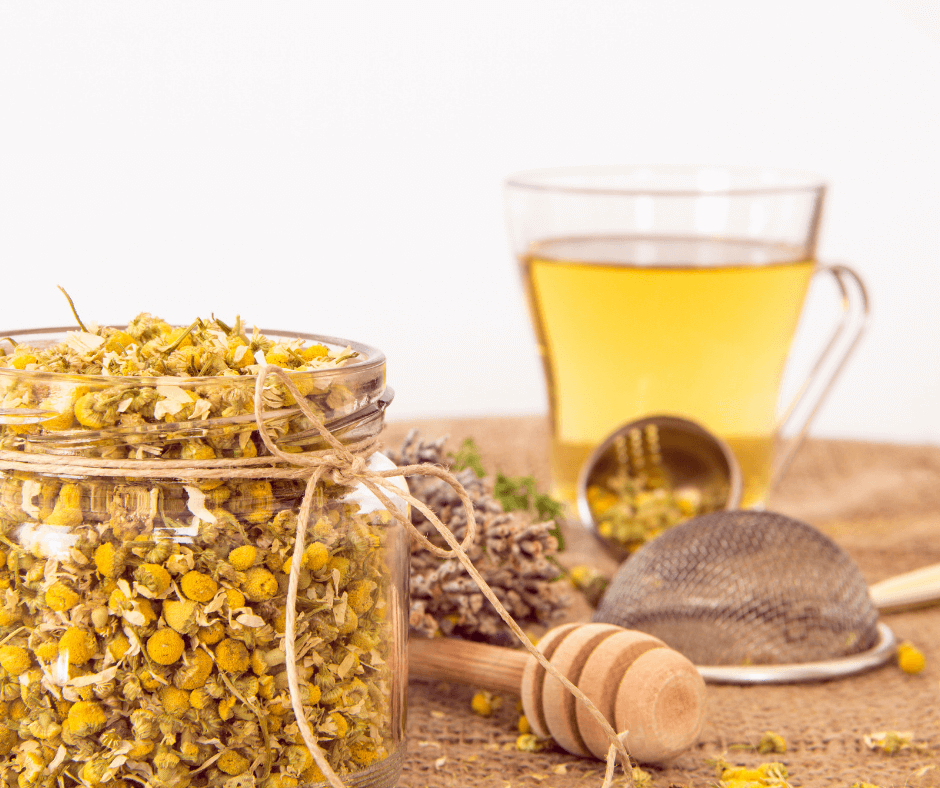