Culinary spices are seasonings used to flavor food that are derived from plants. A spice may be the bud (clove), bark (cinnamon), root (ginger), berry (peppercorn), aromatic seed (cumin), or flower stigma (saffron) of a plant (1). (See figure 1 below)

Figure 1: Parts of a Plant 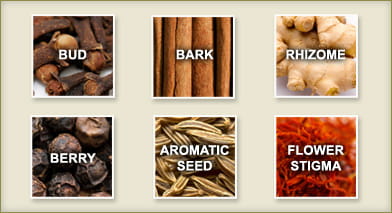 Historically, in addition to making foods taste good, culinary spices have been used as food preservatives and for their health enhancing properties. In the Mesopotamian cradle of civilization where agriculture began, there is evidence that humans were using thyme for its health properties as early as 5000 B.C. and were growing garlic as early as 3000 B.C. (2-4). The international trade in spices was extremely valuable, and whole towns grew up around the spice trade throughout the Middle East, the Asian Silk Road to China and in North Africa.
(Learn more about the history of spices and herbs)

Difference Between a Spice and an Herb

Spices and herbs are only slightly different. An herb is generally defined as the leaf of a plant when used in cooking, but any other part of the plant, often dried, can be a spice. Many of the aromatic seeds known as spices are actually gathered from plants when they have finished flowering. A familiar example would be coriander, with the leaves being referred to as an herb, and the dried seeds as a spice. When referring to the stem and roots of coriander, which are used in cooking, and to onions, garlic and the bulb of fennel, these parts of these plants tend to be classified along with herbs, as they are often used fresh and applied in a similar way to cooking (1).