Black pepper is native to Malabar, a tropical region on the Western Coast of Southern India (part of the Indian state of Kerala). The pepper vine is a perennial ivy-like climber which adheres itself to a support tree or man-made structure. The small (about 0.2 inches), round, berry-like fruits (known as “drupes”) grow in clusters called “spikes”.  A dried drupe is known as a “peppercorn”.  Depend­ing on harvest time and pro­cessing, pepper­corns can be black, white, green, or red. 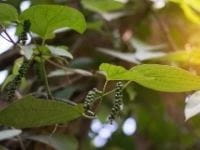 Black peppercorns are the most prevalent type harvested. For black pepper, peppercorn berries are picked while still green, allowed to ferment, and are sun-dried until they shrivel and turn a brownish-black color (1, 2).

Botanically, black pepper is a member of the Piperaceae (pepper family).

While there is only one main culinary species, there are various grades/varieties of pepper identified by their geographic origin such as: Malabar/Alleppey (India), Tellicherry (India), Cochin (India), Sarawak (Malaysia), Lampong (Sumatra/Indonesia), and Belem (Brazil) (1).

Peppercorns are the most widely traded spice in the world, accounting for 20% of the world trade in spices. In 2019, the following countries produced most of the world's black pepper: Vietnam, Indonesia, Brazil, India, and Malaysia (3).

Black pepper, nicknamed as ‘black gold’ and the ‘king of spices’, is the most important and widely consumed spice in the world. Pepper has grown in India for thousands of years and was first introduced to the West after the global conquests of Alexander the Great (4th century BC). Pepper was so precious in ancient times that it was used as money to pay taxes, tributes, dowries, and rent. It was weighed like gold and used as a common medium of exchange. In AD 410, when Rome was captured, 3,000 pounds of pepper were demanded as ransom.

Pepper was used in ancient Roman cuisine and became a status symbol of fine medieval European cookery.  In fact, pepper was so popular in Europe that it helped fuel the age of age of exploration (AD 15th century). For centuries, pepper was only grown in a small region of India (Malabar), and throughout history different cultures held a monopoly on the trade (Arabs, Venetians, Portuguese, and British). In an attempt to establish direct trade with Indian pepper plantations, Christopher Columbus inadvertently stumbled upon the Americas and consequently mislabeled the native inhabitants as “Indians”.  It is interesting to note that a completely unrelated species (chili peppers from the Capsicum family) are referred to as “red pepper”. Chili peppers, which are native to the Americas, were originally introduced to Europe as a substitute for black pepper due to their pungent flavor (1). 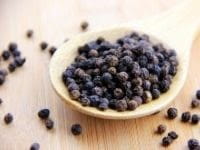 Black pepper contains between 2-4% essential oils and the compound "piperine" is responsible for its characteristic spicy heat.  Differences in age, terroir, and maturity can lead to variations in pepper flavor. Tellicherry pepper (from India) is widely considered to be the highest quality and most flavorful variety of black pepper.

Dried, ground black pepper is one of the most common spices in Western cuisine. Usually referred to simply as “pepper”, it can be found on nearly every dinner table in many parts of the world, often alongside table salt.  Because pepper has a relatively low moisture content, it can be stored for many years without losing its flavor and aroma (especially when in its whole peppercorn form).

Black Pepper adds flavor to almost every food of every nation in the world. It is used in rubs, spice blends, salad dressings, and peppercorn blends. Pepper features prominently in several Arabic spice mixtures such as zhoug, baharat, and berebere. In Indian cooking, it is a component of garam masala and in France it is a main constituent of quatre épices (along with cloves, nutmeg, and dried ginger). In the United States, a combination of dried lemon and black pepper called “lemon pepper” is a popular seasoning for fish.

Black pepper is available whole, cracked, and ground but gourmet cooks prefer freshly ground peppercorns. Many savory dishes can be finished with freshly ground black pepper from a pepper mill. A coarse grind is desirable for dishes such as pepper-crusted steak. Larger amounts of peppercorns can be ground using a spice mill.  The flavor of black pepper mellows with cooking. That is one reason why the pepper shaker on the table is so important.  A dash of ground pepper, applied as each diner prefers, will perk up any cooked meal.

Black pepper is a staple in most American kitchens, but white pepper is more popular in French, Chinese, Vietamese, and Swedish cooking. Use care when substituting one for the other as the American palette is not always used to the stronger ‘musty’ type flavor typical of white pepper.

Did you know that pastry chefs in fine dining restaurants include black pepper in all kinds of desserts. It’s an especially delicious surprise in chocolate sweets, from fudge brownies, chocolate layer cake to chocolate truffles.