Vanilla is from the dried, cured beans or fruit pods of the green-stemmed climbing perennial of the Vanilla species, which is a member of the orchid family. The botanical name, Vanilla, derives from the Spanish name for the spice, vainilla, and is a diminutive of vaina meaning “sheath or pod”. Vanilla goes by similar names in different languages such as fan ni lan (Chinese), vanila (Hindi), vainilla (Spanish), vanille (French), fanilya (Arabic), vaniglia (Italian), and vanille (German).

Vanilla grows on vines that climb shrubs and trees in tropical forested areas. The vines typically require 3 to 4 years to flower, and afterward flower once a year. In native Mexico, indigenous bees perform the pollination of vanilla orchid flowers but most cultivated vanilla is hand pollinated. After the flowers are pollinated, they mature and develop for 8-10 months into long pods that look like string beans, hence the term “vanilla bean”. Inside the pods are thousands of tiny seeds which contain the main flavor components of vanilla (1). 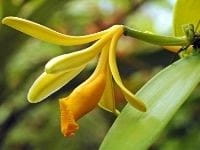 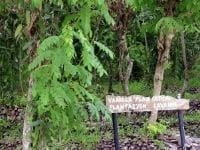 Unlike most other spices, the process of harvesting vanilla is rather complicated, be­cause fresh (green) vanilla beans do not have much flavor. The flavor of vanilla is typically produced after a 3-6 month long curing process. This, and the practice of manual pollination, makes vanilla one of the most expensive spices (after saffron) (2). 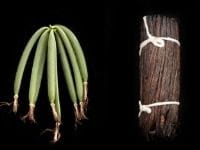 Botanically, vanilla is a member of the Orchidaceae (orchid) family. There are three main species of vanilla used for culinary purposes:

*The vast majority of the world’s vanilla is Vanilla planifolia

Vanilla originated in southern Mexico, but today Mexico is only a minor producer. Many “Mexican vanilla” products sold to tourists are adulterated with Tonka beans and/or a compound called “coumarin” which resembles the taste of vanilla but can be toxic to the liver (4).

Vanilla was prized as an incense, flavoring, and perfume in ancient Mesoamerica by the Maya, Aztec, and Totonac cultures. The ancient Aztecs flavored a chocolate beverage, called Xoco-lall, with vanilla and to this day vanilla is a common ingredient in chocolate candies and beverages.  Spanish conquistador Hernan Cortéz sampled this drink and returned to Spain with reports it contained magical powers (5).

Vanilla may be one of the most popular flavors today but for centuries, vanilla was thought of as nothing more than an additive for chocolate. Vanilla gained its independence from chocolate in the early 17th century when a creative apothecary developed a chocolate-free, vanilla flavored candy for Queen Elizabeth I. In France, vanilla quickly became a favorite flavor for ice cream and Thomas Jefferson brought the recipe home after a stint in Paris as American minister to France. By the late 1800s, demand for vanilla skyrocketed as it became an integral ingredient in soft drinks such as Coca-Cola and Pepsi.

For a long time, Mexico was the only exporter of vanilla since only insects native to Mexico were able to pollinate the plant. In fact, the Mexican city of Papantla was known as “the city that perfumed the world”. Then in 1836, the Belgium's discovered a method to hand pollinate vanilla and Europeans quickly began to grow vanilla across their colonial empires. By the 1870s, the French island colonies of Madagascar and Bourbon (named after the Bourbon kings of France - now called Reunion Island) became the major world producers. To this day vanilla produced in this region is often referred to as “Bourbon” vanilla (1).

Interesting note: many people associate vanilla with the color white. Perhaps this is because a prominent use is for vanilla ice cream whose main color comes from milk and cream. Since vanilla is such a strong flavor, only a little is needed and the color gets diluted. Many imitation vanilla flavors are also white/clear. 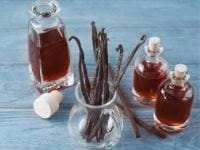 The characteristic flavor of vanilla comes from the aromatic compound “vanillin” which is described as tasting like a marshmallow.  In vanilla pods of exceptionally high quality, the crystallized vanillin may be visible on the surface in the form of tiny white needles. Up to 85% of vanilla essential oil is vanillin. Many artificial vanilla flavors are primarily vanillin and consequently this is what most associate with vanilla flavor. High quality vanilla can also have flavors of aged dark rum, dried fruits (such as prunes) and resin (like aged pine). Tahitian (and Guadeloupe) type vanilla can also have nuanced fruity/floral aromatics. Less desirable characteristics are often the product of picking beans too early before maturation (weak and woody) or improperly performed curing practices which can result in medicinal or smoky flavors.

Vanilla is most commonly sold as an extract. Vanilla extract is made by soaking and percolating vanilla pods in a solution of ethanol (a type of alcohol) and water. Whole vanilla beans can also be purchased and are a popular option for gourmet cooks.

Up until recently, Vanilla tahitensis and Vanilla pompona were considered inferior to Vanilla planifolia due to their different flavor profiles. In the early 2000s, Vanilla tahitensis gained in popularity and is now found in upscale desserts such as panna cotta, crème brûlée, and high-end vanilla ice creams.  Vanilla pompona is also gaining visibility and can be purchased from an increasing number of gourmet food purveyors.

Did you know that vanilla is the most popular ice cream flavor in the United States and comprises 28% of the ice cream produced each year. The second most popular flavor is chocolate at 10% (6).

When using whole beans, look for pods that are plump and pliable (not dry and brittle). Split the bean open vertically with a paring knife and scape out the seeds with the knife blade. Seeds can be directly added as an ingredient. Split seeds can also be used to flavor dishes while braising (remove the bean pod before serving). As a general guideline, the seeds from a vanilla bean will produce the equivalent of about 3 teaspoons of extract (but this also depends on the size and quality of your bean). Vanilla bean pastes are also available which usually contain a combination of vanilla bean seeds and extract mixed with a sugary syrup and thickener.

Storage: high quality vanilla extract will keep indefinitely and some may even improve - like a fine wine!  Vanilla beans can be kept for up to 2 years if stored properly.  Keep them in a cool dry place in a closed container to keep them from drying up.