Turmeric is the dried knobby shaped rhizome of the plant Curcuma longa. Noted for its bright yellow color, it is related to and similar in appearance to ginger. The origin of the Latin name Curcuma stems from the Arabic word al-kurkum which was the original word for saffron. This is most likely since both saffron and turmeric are used to make yellow colored dyes. In many languages, the name “turmeric” literally means “yellow root”.  In different languages turmeric is called: kurkum (Arabic & Hebrew), huang jiang (Mandarin Chinese), curcuma (French, German, Italian, Spanish), and haldi (Hindi)(1).

Turmeric is a herbaceous perennial that reaches about three feet tall with grass-like leaves and greenish-yellow flowers. Turmeric thrives in rainy tropical areas such as the Indian subcontinent and Southeast Asia.  Turmeric is often referred to as a root but this is technically incorrect. Rhizomes are underground stems that grow horizontally underground (and have smaller roots growing from them). The underground rhizome of turmeric consists of two distinct parts: the egg-shaped primary or mother rhizome, which is an extension of the stem, and the long cylindrical, multi-branched secondary rhizomes, growing downward from the primary rhizomes (2). 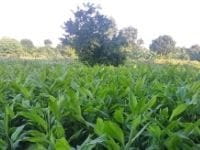 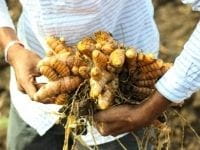 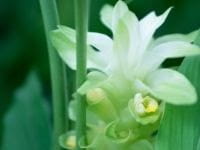 Botanically, turmeric is a member of the Zingiberaceae (ginger) family.

The genus Curcuma consists of upwards of 100 different species.  While Curcuma longa is the most widely used species, there are a few others of note that are used for culinary purposes:

India is the major producer, exporter, and consumer of turmeric and produces about 80% of the world’s crop. Turmeric is grown in several other countries such as Pakistan, Malaysia, Myanmar, Vietnam, Thailand, the Philippines, Japan, China, Korea, Sri Lanka, the Caribbean Islands, and Central America (2,3).

The use of turmeric dates back 4000 years to the Vedic culture in India, where it was used as a culinary spice and had also had religious and medicinal significance. Marco Polo, in AD 1280, mentioned turmeric in notes of his travels in China: "There is also a vegetable that has all the properties of true saffron, as well as the smell and the color, and yet it is not really saffron." In medieval Europe, turmeric was known as "Indian saffron".  Since then, turmeric has been used as an inexpensive substitute for saffron.

Turmeric is sacred in the Hindu religion and a turmeric dyed string known as the mangala sutra is worn by brides to signify readiness to marry and manage a household. Turmeric is also used to dye clothing and has been used for centuries to create the bright yellow hue of Buddhist robes.

The flesh of the Turmeric rhizome is orange-brown, yellow or reddish-yellow in color. Ground dried turmeric is soft and fine and bright yellow-orange in color.  Compounds in turmeric called "curcuminoids" are responsible for its bright color. 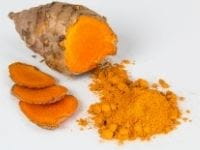 The rhizomes contain 2–5% of volatile oil and compounds called "turmerones" are responsible for the characteristic flavor of turmeric. Compared to its cousin, ginger, the flavor of turmeric is not nearly as spicy (2). 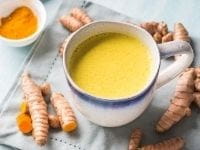 In addition to its use as a flavoring, turmeric is a powerful coloring agent. It is traditionally used to color and flavor prepared mustard, pickles, relish, chutneys, and rice dishes as well as butter and cheese.

Turmeric is best when paired with other spices and herbs such as warm spices with complimentary flavor profiles such as cinnamon, black pepper, and ginger. Partner turmeric with coconut milk to create authentic homemade curries or golden milk. Use turmeric to add a splash of color and flavor to your favorite dishes. Add 1/4 tsp to the water when cooking 1 cup rice to give a yellow color.  Or try adding ½ teaspoon of turmeric to store bought (or homemade) mac and cheese for a healthful and colorful boost. Fresh turmeric can be found in some gourmet markets.  Before using, peel as you would ginger root.  The root can then be grated or chopped.

Helpful tip: turmeric can stain cooking equipment. To combat this, you can coat wooden utensils with mineral oil before use or try washing out stains using a mix of baking soda, soap, and hot water.