Thyme is the dried leaf from the Thymus vulgaris shrub. The name “thyme” derives from the Greek word thymos which means “to fumigate”. This mostly likely refers to the aroma generated by the burning of thyme as incense in ancient Greek temples. The species name, vulgaris, is Latin for “common” or “widespread”. In different languages thyme is called: satr (Arabic), bai li xiang (Mandarin Chinese), thym (French), thymian (German), timo (Italian), tomillo (Spanish), thimari (Greek), and ajwain ke phul (Hindi)(1, 2).

Thyme is a small perennial shrub that grows 4-12 inches in height with slender, wiry, and spreading branches. It has small green-grey evergreen leaves and violet colored flowers. Thyme prefers dry chalky soil and tolerates drought once it is established. It thrives in full sun, but also tolerates partial shade. The herb is sourced from both commercial farms and wild harvesting.  Much of the crop is picked by hand since it grows low to the ground. Thyme is most aromatic right before its flowers start to bloom. After harvest, thyme is usually dried (naturally air dried or commercial hot air) to preserve its shelf life (2). 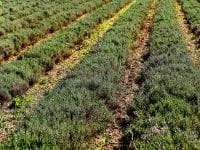 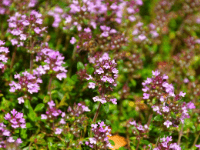 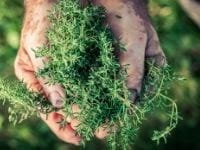 Thyme is native to southern Europe, ranging from Spain to Italy. The herb is cultivated in Eastern and Southern Europe and Northern Africa, but also in the United States. Botanically, thyme is a member of the Lamiaceae (mint) family.  There are a few species of thyme used for culinary purposes (1):
*Thymus vulgaris is considered the main culinary species

Thyme has been used since ancient times for its culinary and medical properties. The ancient Egyptians utilized thyme as part of their embalming process. The first recorded evidence for the medical uses of thyme dates back to the first century AD in Dioscorides’ De materia medica and Pliny’s Natural History. Thyme was well regarded by the ancient Greeks and Romans for its antiseptic properties and traditional remedies to this day associate thyme with the alleviation of pulmonary afflictions such as coughs. In the 19th century AD, constituents of thyme oils were used by dentists to treat oral abscesses and inflammation and as an antiseptic.

Thyme has also been used for symbolic purposes. Roman soldiers would bathe in thyme to become courageous and up until medieval times thyme was given to soldiers upon leaving for battle. In medieval Europe, wild thyme was thought to attract fairies, especially on midsummer's eve. There is a Christian legend that thyme was in the hay of the manger for the infant Jesus and consequently, has had a wonderful scent ever since (2,3). 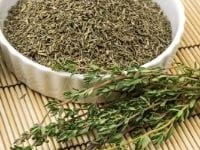 Thyme essential oil content varies drastically with climate, time of harvest, and storage conditions: extreme values are 0.75% and 6.5%. Main components are the phenolic compounds thymol (described as “sweet-phenolic-herbal-medicinal”) and carvacrol (described as “dry-medicinal-phenol-tarry”)(1).

Thyme is an important herb in many European cuisines, especially in Southern Europe. In France, bouquet garni (pictured below) are made up of fresh branches of thyme tied together with other fresh herbs (such as rosemary, parsley, and bay leaf) and are added to soups, sauces and stews, being removed before serving. Dried thyme is also part of herbs de Provence, a spice blend from Southern France. 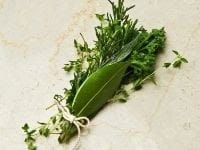 In the Middle East, thyme is an important component of the seasonings zahtar (combination of sumac, sesame, salt, and herbs) and dukka (an Egyptian nut, seed and spice blend).

In the Americas, the Creole cuisine of New Orleans is known for its extensive use of thyme. A cooking technique peculiar to Creole cooking is “blackening”: meat or fish fillets are dipped into molten butter, then coated with a spice mix (containing thyme, red pepper, oregano, salt, garlic and onion powder) and then fried very quickly at high temperature in a heavy skillet. Thyme is also a key component of Jamaican jerk seasoning, which can also contain allspice, Scotch bonnet peppers, cloves, cinnamon, nutmeg, garlic, brown sugar, ginger, and salt.

Thyme is one of the spice rack’s most versatile herbs and goes great with vegetables, seafood, and poultry.  Unlike many herbs, dried thyme retains much of the flavor of fresh and is a suitable substitution. As a general rule, 1 tsp. dried thyme leaves = 1 tbsp. chopped fresh thyme. As with most dried herbs, it should be added toward the beginning of the recipe to allow time for its flavor to infuse the dish.

If a recipe calls for a "sprig" of thyme, fresh thyme is preferable and the leaves and stem should be kept intact. The leaves usually fall off during cooking and the woody stem can be removed prior to serving. Fresh thyme is unique among fresh herbs in that it withstands and benefits from long cooking times to slowly infuse its flavor into the dish.  Sprigs of fresh thyme also make an attractive garnish in finished dishes.