Sage is the dried leaves of the Salvia officinalis plant. The name Salvia, is derived from the Latin “salvere”, meaning to save, in reference to the medicinal properties of the plant. The name officinalis, derives from the Latin word “officina” which was the traditional storeroom of a monastery where herbs and medicines were stored. Sage goes by many names in different languages such as marameeah (Arabic), shu wei cao (Chinese), sauge (French), salbei (German), salvia (Italian, Spanish), and sathi (Punjabi)(1).

Sage (Salvia officinalis) is a medium sized perennial shrub that can reach up to 2 feet in height. It has erect stems, hairy green branches, simple elongated light green/silver colored leaves and long blue/purple flowers. The flowers are extremely attractive to butterflies, bees, and hummingbirds. The leaves of the plant are harvested for culinary purposes. Sage is native to the hilly regions of the Mediterranean and prefers cool temperate to subtropical conditions (generally warm and dry weather)(2). 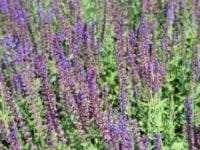 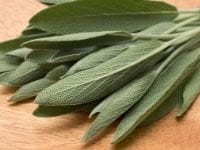 Sage is typically planted in the spring season and is ready for harvest after about 60-70 days. The plant is pruned a few times during the season and can have multiple harvests. Most sage is sold in the dry form and drying can occur in the sun or through industrial convection drying.

Botanically, sage is a member of the Lamiaceae (mint) family .

There are over 900 species of Salvia. The main culinary species is Salvia officinalis but several others are utilized for culinary purposes (a few of the more common species are listed below)(1):

Salvia officinalis is native to the Mediterranean and Middle East. Historically, Southeastern Europe has become the principal producer of Sage. Dalmatian sage (from Croatia), has been recognized as one of the most superior sources of sage.

Sage has been an important medicinal plant since ancient Egyptian times when it was used as a fertility treatment.  The ancient Greek physicians Dioscorides and Galen recommend sage for wound healing, women’s health, and as a diuretic. Sage was used during the Middle Ages to treat many maladies including fevers, liver disease, and epilepsy. The herb was used in England to make a tea that was considered a pleasant and healthful beverage. One common belief was that sage strengthened the memory, hence a "sage" (wise man) always had a long memory. In the 9th century, Charlemagne had sage included among the herbs grown on his imperial farms in Germany. During the 17th century, the Chinese exchanged three or four pounds of tea with Dutch traders for one pound of European sage leaves.

The aromatic leaves are silvery gray in color. Dried sage is usually sold ground or rubbed. Ground sage is made by grinding the entire leaf into a fine powder while rubbed sage is made by rubbing dried whole sage leaves to create a light and fluffy mix. 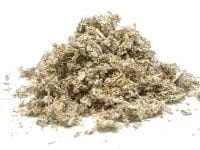 The main flavor of sage comes from the aromatic compounds “α-thujone”, “1,8-cineole”, “camphor”, and “borneol” (4). Sage has a powerful and dominant flavor with some similarities to rosemary. Dalmatian type sage is considered by many to have the best flavor (1).

Sage is used in Greek, Italian, and European cuisines. It is used to season sausages, poultry, and fish. Veal Saltimoboca is a famous Italian dish that incorporates fresh sage leaves. Fresh sage leaves can be fried to a crispy texture for pasta and gnocchi dishes. In the United States, sage is the classic herb in bread stuffing served at Thanksgiving.  Sage is a main component found in many poultry and Italian seasoning blends.

Fresh sage leaves are thicker than basil leaves with a soft, downy feeling. They're tender and easily torn but are usually chopped or minced before adding to a dish.  Dried sage is typically sold rubbed or ground (powdered).  Rubbed sage is lighter and less concentrated; 2 teaspoons of rubbed sage is roughly equivalent to 1 teaspoon of ground sage. It is best to add fresh sage towards the end of the cooking process and dried sage towards the beginning so it has time to mellow and blend with other flavors in the dish.