Saffron is planted as a corm, an underground plant stem that is similar to a bulb. It is a perennial crop which can be maintained for up to 6–10 years although in some areas it is planted annually. In the Northern hemisphere, the planting season is from July to September. Each corm produces 1-3 small purple flowers with violet colored petals. The leaves of the plant are long, slender, and grass-like. Saffron is hand-harvested in late October-early November when flowers are fully bloomed and the saffron strand (stigma) is at its reddest. Harvesting begins shortly after dawn since picked saffron quickly loses its color and flavor and withers under the sunlight (2-3). 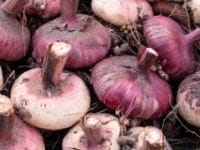 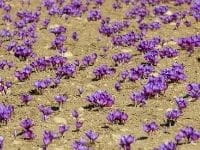 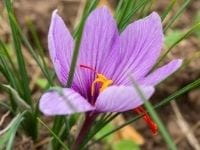 Shortly after harvest, the stigma is carefully hand-separated from the flowers and dried. In Spain, the traditional drying method involves gently roasting the stigma over the embers of a charcoal fire. Harvesting the flowers and separation of stigmas is time consuming and laborious which makes saffron the most expensive spice in the world (over $4,000/pound)(4).  About 200,000 saffron stigmas (picked from ~70,000 flowers) yields 1 pound of saffron and this can take roughly 200 man hours (2,3). 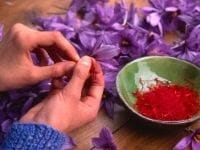 Botanically, saffron is a member of the Iridaceae (iris) family.

The genus Crocus consists of about 85 different species (3). Crocus sativus is the only species widely utilized as a spice. Many of the other Crocus species are cultivated for ornamental purposes.

The major saffron cultivating countries for trade are Spain, Iran, Greece, India, China, and Morocco. Spain and Iran are the largest producers, accounting together for more than 80% of the world’s production. The best quality saffron is said to be harvested in the Spanish region of La Mancha (1, 2).

Saffron has been cultivated as a spice for at least 5,000 years in Egypt and the Middle East. The first mention of saffron dates back to the Accadian empire (2300 BC). The harvesting of saffron appeared in Minoan pottery and frescoes from the Palace of Minos in Knossos, Crete (1700–1600 BC). Krokos was the ancient Greek word for saffron and appears in songs IX and XII of Homer’s Iliad. In Greek mythology, Krokos, the lover of nymph Esmilax, was transformed into the plant saffron by Hermes. Ancient Greek & Roman physicians Hippocrates, Theophrastus, and Galen considered saffron as an appetite stimulant and digestive aid. Saffron was also known in ancient Egypt and mentioned in the Eber’s papyrus as an ingredient in a cure for kidney problems. In the Bible, saffron (karkon’ in Hebrew) is referred to in the Song of the Songs (4:14) of King Solomon. It is thought that saffron was introduced to India via Persian rulers’ efforts to stock their newly built gardens and parks. In India, saffron is highly regarded in Ayurvedic medicine to heal a variety of diseases ranging from arthritis to impotence and infertility. The Romans introduced saffron into Great Britain, while the Arabs brought saffron to Spain (1-3).

In the ancient world, textiles dyed with saffron were rare, extremely expensive, and considered as royal status symbols. The saffron mantle of the kings of Ireland and saffron-dyed material supplied by the Phoenicians to the kings of Assyria are examples. In modern times, the use of saffron as a dye has been replaced by synthetics due to cost (2).

Due to its high price, adulteration and cheating have been pervasive in the saffron trade. Turmeric is commonly mislabeled as “Indian saffron” and those unfamiliar with the taste and color of quality saffron may purchase old, inferior, or adulterated product. Additional parts of the flower can be included such as the stamen, which is yellow in color and low in flavor. Other flowers such as safflower and calendula are sometimes sold as counterfeit saffron. In extreme cases, fibers of salted and dried meat are masqueraded as saffron (1).

High quality saffron is intensely red in color. The major components responsible for the coloring strength of saffron are compounds called “crocins” which are highly water soluble (2). 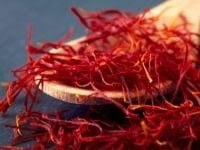 Saffron contains between 0.3-0.8% volatile oils. A compound called “safranal” is the principal substance responsible for the aromatic profile. Up to 150 other volatile components round out the complex aroma and flavor of saffron (2).

Saffron is used both to flavor and color a wide range of foods and is popular in many European and Asian cuisines. In Europe, it is the key flavoring ingredient in Spanish paella (pictured below), French bouillabaisse, Italian risotto alla Milanese, English saffron cakes, and Swedish holiday breads. 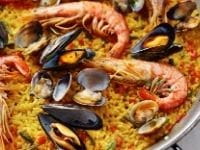 In central and Northern Asia, saffron flavors rice dishes such as North Indian biryani and Persian tachin. Popular Indian sweets such as kheer (rice pudding), ras malai (cheese curd balls in spice sweetened cream), kulfi (India frozen dessert), and zarda (boiled sweet rice dish) are often flavored with saffron. In Arabic countries, visitors are welcomed with a drink prepared from coffee, saffron, and cardamom. In Japan, it is employed to enhance the taste of fish and give it a golden-yellow color (1,2).

Given it’s expense, it’s encouraging to know that the seemingly small amount of saffron provided in most packages will season many dishes. It requires only a few threads (stigmas) of saffron to add a golden yellow color and distinctive flavor to rice, bread, cake, bouillabaisse, sauces, paella, soups, seafood, and poultry.

The vast majority of saffron is sold in its whole stigma form. Packets of powdered saffron are available for purchase, but because adulteration is common it's always best to grind your own using a mortar and pestle. Adding a small amount of salt or sugar while grinding can provide the additional abrasion needed to form a fine powder.

Saffron is water soluble and requires heat and hydration to develop its flavor and color so it’s not the best choice for use as a finishing sprinkle or topping. To get the most out of saffron, many recipes call for steeping the strands in hot water, alcohol, or vinegar before adding the resulting liquid extract to the recipe. Some recipes call for powdered saffron mixed with milk and allowed to steep for about 30 minutes before adding to a recipe.

For some dishes like risotto alla Milanese and bouillabaisse, whole saffron threads can be used as these recipes generally have enough liquid and simmering time to develop saffron’s flavors.