Rosemary is the dried leaves of the evergreen shrub Rosmarinus officinalis. The botanical name, Rosmarinus, is derived from the Latin words ros (“dew”) and marinus (“belonging to the sea”). The etiology of the name may be a reference to the sea-blue flowers of rosemary. Rosemary goes by many names in different languages such as mi die xiang (Mandarin Chinese), rosmarino (Italian) romero/rosmario (Spanish), romarin (French), ikleel al-jabal (Arabic), and rosmarin (German)(1).

Normally hand harvested, the perennial rosemary shrub grows to about 2-3 feet tall.  It is native to the Mediterranean region (southern Europe, Asia Minor, and North Africa) but is also reasonably hardy in cooler climates (as an annual). In some climates, rosemary can live as long as 30 years. It can survive drought and prefers well drained, sandy soil. Rosemary flowers in the summer but can be in constant bloom in warm climates. Flowers can be white, pink, purple, or deep blue. It is best to harvest rosemary right before it flowers (for maximum flavor). Rosemary can be pruned and harvested multiple times and is a popular herb grown in backyard gardens. 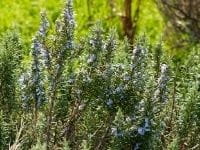 Botanically, rosemary is a member of the Lamiaceae (mint) family.

There are two main species of rosemary sold throughout the world for culinary purposes:

*The genus Rosmarinus has been recently merged into the genus Salvia

Rosemary is cultivated worldwide.  Leading regions of rosemary production are the Mediterranean, England, Mexico, and the United States.

Use of rosemary dates back to the ancient Egyptians where there is record of King Ramesses III offering 125 measures of rosemary to the god Amon at Thebes. In ancient Greece, rosemary was valued for its alleged ability to strengthen the brain and memory: students took rosemary to improve their memory and wore rosemary garlands when studying for examinations.

The plant has been used as a symbol for remembrance during war commemorations and funerals in Europe and Australia and is planted around graves throughout much of Europe. In Shakespeare's Hamlet, Ophelia says, "There's rosemary, that's for remembrance. Pray you, love, remember."

During Medieval times, the French used rosemary to embalm the dead. It was also carried by visitors to English prisons as a precaution against typhus. During plague years, sprigs of rosemary leaves were inserted into the hollow heads of canes carried by physicians (2). Rosemary leaves contain about 1 to 2.5% essential oils and the main flavor of rosemary comes from the aromatic compounds “eucalyptol” and “alpha pinene” which are described as camphor-like and piney respectively (4).

Rosemary is popular in many Western countries, especially in Italy and Southern France.  It is less used in Asian cuisines. Rosemary is found in the French herb blends bouquet garni and herbes de Provence as well as in seasoning blends for lamb, roasted vegetables, and various Mediterranean dishes. It is commonly used to top Focaccia bread and in many restaurants chopped rosemary is infused into olive oil as a dip for bread. 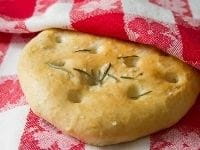 Fresh rosemary is readily available in the produce aisle of many grocery stores. It can also be found dry in the spice aisle. Because rosemary has a low moisture content even when fresh, it retains its flavor better than most herbs after drying. Rosemary is one of the stronger flavored herbs and should be used sparingly. To strip fresh rosemary leaves from the stem, pull the needles in the opposite direction from which they grow and they should easily slide off the stalk. Mince the needles by rocking your knife back and forth over the needles until finely chopped. Fresh rosemary sprigs can be used as flavorful skewers for kebabs and fish.

Fun fact: did you know that rosemary flowers are edible and can be used in salads and as garnishes?