Red pepper is the dried, ripened fruit pod from pungent (hot) varieties of the Capsicum species. It is sometimes referred to as Cayenne pepper, having been named after the high heat chilies grown in the vicinity of the Cayenne River in French Guiana. In addition to Cayenne, red pepper also goes by other names including chili pepper, chile pepper, hot pepper, and red chillies. The name Capsicum is derived from the Latin/Greek word for for “capsule” which refers to the shape of the fruits. Red pepper goes by many names in different languages such as la jiao (Mandarin Chinese), mirch (Hindi), chile (Spanish), poivre rouge (French), fulful alahmar (Arabic), roter Pfeffer (German), and peperone/diavoletto (Italian) (1).

Red pepper originated in Central and South America. After the European discovery of America, many cultivars (varieties) deriving from several species spread throughout the world.  Ideal growing conditions for peppers includes sunshine with warm, loamy soil, ideally between 70 to 84°F. In temperate climates, peppers are grown as an annual plant during the summer season. In warmer clients, peppers can be grown year round.  Pepper plants are typically grown from seedlings in a nursery before being transported to the field. They produce small white flowers that are self pollinating and fruit begins to form about 5-10 days after pollination. Peppers start off as green and then grow to their mature size before ripening (usually to a red color). Some pepper varieties, such as jalapenos, are picked while still green just prior to ripening.  Peppers are widely consumed in both their fresh and dry forms. 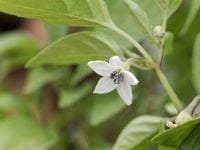 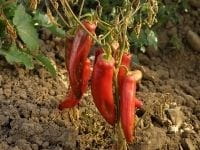 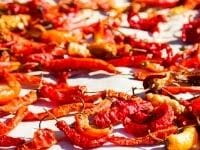 Botanically, red peppers are a member of the Solanaceae (nightshade) family. Within the genus Capsicum, five species are commonly recognized as domesticated and used for culinary purposes (2).  Within each species, there are thousands of different cultivars, of which a few are listed as examples below:

*Most commercially available red pepper is from the Capsicum annuum species and crushed red pepper flakes typically include the Cayenne variety alone or blended with other cultivars.

Although red peppers are originally from Central and South America, they are now widely grown and consumed throughout the world including, India, Pakistan, China, the Mediterranean, Mexico, and the United States.

Capsicum fruits (including red peppers) have been a part of human diets since about 7,500 BC and are one of the oldest cultivated crops in the Americas.  It should be noted that red pepper is not at all botanically related to black pepper (piper nigrum). Early Spanish explorers found red pepper in the Caribbean while searching for black pepper berries. In innocent confusion (or perhaps to save face), the Spaniards named their discovery "red pepper".  After chili peppers were brought back to Europe, Portuguese traders rapidly introduced red peppers throughout Asia where they were particularly welcomed by Indian cooks who were already accustomed to spicy flavors. Pepper plants thrived in Asia and became so ubiquitous that many wrongfully assumed chili peppers as native to many Asian cuisines.

In addition to its role in cuisine, the potency of chilies are believed to have supernatural powers. In South India, nimbu mirchi (a combination of chili peppers and lemon) is tied outside the entrance of homes and businesses to ward off Alakshmi, the goddess of misfortune. 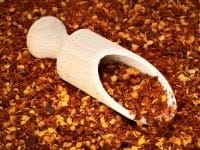 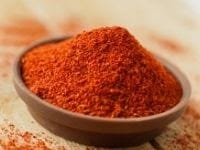 Red pepper is best known for its spicy heat. The burning sensation from eating pepper fruits is caused by compounds called “capsaicinoids”. The level of heat is measured by “Scoville Heat Units” (SHU): the higher the number, the hotter the pepper. Cayenne peppers are about 8,000 SHU while orange Habanero peppers are 210,000 SHU.  Cayenne pepper powder is typically hotter than red pepper flakes.

Red Pepper adds heat and bite to seasoning blends, meats, pickles, seafood, Italian, Indian, Mexican, and Caribbean cuisines. Red Pepper is used in seasoned salt, chili powder, jerk, Mexican mole negro, and berbere seasoning blends.  Red pepper is often found on kitchen tables in many spice loving households for use as a finishing sprinkle to pizza, pasta and anything where a dash of heat is desired.

When cooking with Cayenne pepper powder, use a dash to 1/8 tsp in most recipes for 4 servings unless very hot food is desired. Crushed red pepper provides a nice dash of color and heat to the brine of pickle recipes. You can spice up store bought pickles by adding red pepper flakes to the jar after opening.  Red chili oil is an important Chinese condiment that goes with many dishes including dumplings and noodles. You can make your own by steeping crushed red pepper flakes in hot oil. A sprinkle of cayenne or red pepper can add a touch of fiery red to liven up bland looking dishes.