Paprika is made from the dried, ground, ripened fruit pods of less pungent varieties of the Capsicum annum species. It is mildly flavored and prized for its brilliant red color. It is closely related to red pepper which also derives from the Capsicum annum species. The name Capsicum is derived from the Latin/Greek word for “capsule” which refers to the shape of the fruits. Paprika goes by many names in different languages such as tian jiao (Mandarin Chinese), deshi mirch (Hindi), piment annuel/piment doux (French), fulful halou (Arabic), paprika (German, Spanish, English), and peperone (Italian) (1).

Paprika and red pepper are similar botanically. Ideal growing conditions for Capsicum annum peppers includes sunshine with warm, loamy soil, ideally between 70 to 84°F. Paprika is typically made from “bell” or “sweet” type peppers, milder varieties that contain a recessive gene that eliminates (or greatly reduces) capsaicin, the compound responsible for heat. Pepper plants are typically grown from seedlings in a nursery before being transported to the field. They produce small white flowers that are self pollinating and fruit begins to form about 5-10 days after pollination. Peppers start off as green and then grow to their mature size before ripening to a red color. Since paprika is prized for its red color, peppers are allowed to fully ripen before picking. After harvest, seeds are removed and the fruit pods are dried and ground (2). 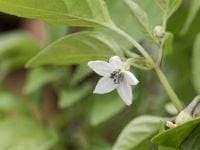 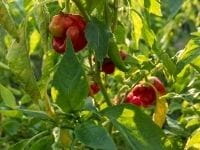 Botanically, paprika peppers are a member of the Solanaceae (nightshade) family.

Early Spanish explorers took red pepper seeds back to Europe, where the plant gradually lost its pungent taste and became "sweet " paprika.  Paprika is considered as the national spice of Hungary, where it was introduced by the Turks in 1569.  Hungarian paprika is available in eight different varieties ranging in color and pungency.  In 1937, the Hungarian chemist Albert Szent-György won the Nobel Prize for research on the vitamin content of paprika. Pound for pound, paprika has a higher content of Vitamin C than citrus fruit.

The most common type of paprika is finely ground and a bright orange-red color.  Regional varieties, such as those found in Hungary, may vary in color to include an array of brown, red, and orange hues. Paprika derives its bright colors from compounds called “carotenoids”. 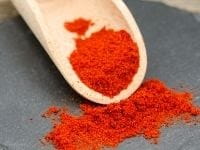 Generally speaking, paprika is much lower in capsaicin, the pungent (hot) compound found in red pepper. Compounds in paprika called “methoxypyrazines'' are responsible for its vegetative flavor.  The sweetness of paprika comes from a sugar content of up to 6%. There is a great deal of variation in the flavor profiles of different types of paprika. The spice can range in flavor from mild and sweet to very hot. Domestic paprika is characteristically mild, sweet and vegetable-like. Some Spanish paprikas are dried by smoking and thus have a smoky flavor.  Some varieties, such as Hungarian, can exhibit pungent (hot) characteristics.

Paprika is equally valued for its taste and color.  Paprika is found in several spice blends including the Arabic seasoning baharat.  Paprika plays a starring role in Gulyás (Goulash), the national dish of Hungary and the popular dish, chicken paprikash.  It is also a key ingredient in many Spanish sausages, such as Chorizo. 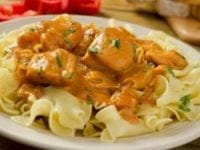 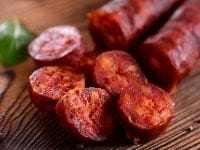 Paprika is a mellow ingredient, bringing beautiful color and a hint of sweetness. Use paprika to add flavor and vivid red color to pretty much any dish. It works great with lighter colored foods such as potato salad and deviled eggs. Since paprika has a mild flavor, larger amounts can be used.  Use paprika as a base for your own spice rubs: a combination of paprika, thyme leaves, black pepper, and salt works great on pork chops.  For best results, add paprika towards the end of the cooking process, because heat diminishes both the color and flavor.

Some recipes start with frying spices in hot oil. Since paprika contains significant amounts of sugar it can quickly burn. Take care to fry paprika over a lower heat for a shorter amount of time.