Cumin is the dried seed of the herb Cuminum cyminum, a member of the parsley family. The English name cumin comes from Latin cuminum, which was borrowed from the Greek kyminon. Cumin goes by many names in different languages such as kū míng (Chinese), jeera (Hindi), cumino (Italian), comino (Spanish), cumin (French), kamoun (Arabic), and kreuzkümmel (German)(1).

The cumin plant is an annual herbaceous plant with slender branched stems and lace-like flowers that grows to about 1-2 feet tall. The plant is drought-tolerant and grows throughout the South Mediterranean and West Asia (2). 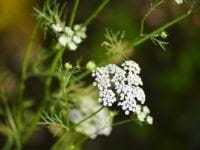 Cumin is ready to harvest after 3- 4 months when the flowers develop into seed and become dry and brittle. Cumin seeds are typically harvested by hand. 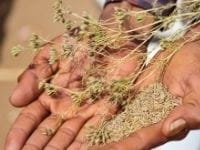 Botanically, cumin is a member of the Apiaceae (parsley) family.

Cumin originated in Western Asia where it was cultivated since biblical times. Today, India and Iran are the main producers of cumin worldwide. It is also cultivated in Argentina, Morocco, the Ukraine, Egypt, Lebanon, Malta, Mexico, Afghanistan, Pakistan, Turkey, Central America, and Central Asia (2).

Originally cultivated in Iran and the Mediterranean region, cumin is mentioned in the Bible in both the Old Testament (Isaiah 28:27) and the New Testament (Matthew 23:23). The oldest reference to cumin dates back 5,000 years as a mummification ingredient for the bodies of Egyptian pharaohs. The ancient Greeks kept cumin at the dining table in its own container. Superstition during the Middle Ages cited that cumin kept chickens and lovers from wandering. It was also believed that a happy life awaited the bride and groom who carried cumin seed throughout the wedding ceremony.

Cumin seeds are similar to fennel and anise seeds in appearance, but are smaller and darker in color. Ground cumin is brownish-yellow in color. 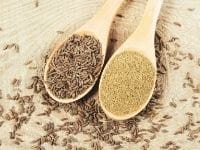 Cumin is one of the most popular spices throughout Asia, especially in India where it is an important component of many popular recipes such as: the yogurt dish raita, alu jira (potatoes with cumin), masala dosa, and the popular spice blend garam masala. Cumin is also popular in Arabic cuisines and a part of baharat seasoning, north African tagines, and falafel. In Mexican cuisine, cumin is a critical ingredient of chili powder, and is found in achiote blends and adobos. Cumin has less importance in traditional European dishes although it has been used to flavor some traditional cheeses such as the Dutch cheese, Leyden (1).

Cumin is sold both in whole and ground forms. The ground form is found in many spice blends and can be applied to meats as a marinade or rub. Whole seeds are often toasted to enhance flavor and should be included early in the recipe to allow for full flavor release. In many cuisines, whole seeds are added to the initial frying of onions and garlic. In addition to flavor, whole cumin seeds can add interesting visual and textural elements to a dish. Cumin seeds can be ground using a mortar and pestle or spice/coffee grinder.