Cinnamon is the dried inner bark of various evergreen trees belonging to the genus Cinnamomum.  The botanical name, Cinnamomum, derives from the Hebraic and Arabic term “amomon”, meaning “fragrant spice plant”.  Some types of cinnamon are also referred to as “cassia”.  Cinnamon goes by many names in different languages such as ròuguì (Chinese), dalchini (Hindi), canela (Spanish), cannelle (French), qarfa (Arabic), and zimt (German).

Cinnamon is produced by selectively pruning young Cinnamomum sp. evergreen tree branches after about 2-3 years of growth.  After cutting, new branches will regenerate and a typical tree can be harvested for about 40-50 years (1). 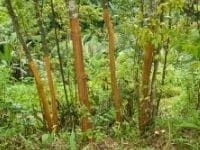 At harvest, the outer bark is first scraped off and then the inner bark is stripped and laid in the sun, where it curls into cylindrical "quills."

Botanically, cinnamon is a member of the Lauraceae (laurel family). There are four main species of cinnamon sold throughout the world for culinary purposes:


*Ceylon cinnamon is sometimes marketed as the only “true” cinnamon referring to other types as “cassia”. This statement is misleading as all species listed above are botanically classified as cinnamon.
In 2019, the following countries produced most of the world’s cinnamon: China - 50%, Indonesia -  28%, Vietnam - 13%, and Sri Lanka - 8% (2).

Cinnamon was one of the first known spices. In ancient Egyptian times, much of the world’s cinnamon came from China.  The Romans believed cinnamon's fragrance sacred and burned it at funerals, but it was not popular as a cooking spice. In medieval Europe, cinnamon became a favorite flavor in many banquet foods.  It was also regarded as an appetite stimulant, a digestive, an aphrodisiac, and a treatment for coughs and sore throats.  Because cinnamon was one of the first spices sought in 15th century European explorations, some say it indirectly led to the discovery of America.  Between the 16th and 18th centuries, the Dutch and Portuguese brutally fought to control the cinnamon plantations of Ceylon (now called Sri Lanka) (3). 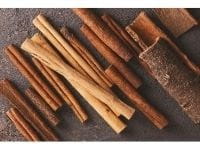 Good quality cinnamon bark can contain up to around 4% essential oil.  The main flavor of cinnamon comes from the aromatic compound “cinnamaldehyde” which is described as tasting like spicy “red hot” or “atomic fireball” candy.  Of the four main culinary species of cinnamon, Vietnamese and Chinese typically have the highest cinnamaldehyde content and spicy flavor.  Chinese cinnamon can sometimes taste bitter and astringent and is generally considered to be lower in quality than Vietnamese. Indonesian cinnamon is usually less spicy and is prized by bakers for its balanced warm and woodsy flavor.  Ceylon cinnamon has a mild spiciness and exhibits unique flavors such as fruity, floral, and clove-like.

Ground cinnamon is used in baked dishes, with fruits, and in confections.  Cinnamon is predominant in the spice blends of the East and Southeast Asia. It is a component of Chinese five spice powder (along with star anise, cloves, pepper, and fennel).  It is also used in savory dishes such as moles, garam masala, and berbere.

Vietnamese cinnamon is often sold as a premium product in the United States whereas Ceylon cinnamon is prized more so in Europe and Mexico.

Did you know that not all Cinnamon is created equal for baking cinnamon rolls? The “gooey” component of the cinnamon filling comes from soluble “mucilaginous” fibers naturally found in cinnamon bark.  Indonesian (Korintje) cinnamon, sometimes referred to as baker’s cinnamon, typically contains higher amounts of mucilaginous fibers and thus produces a “gooey-er” filling (5).