Ginger is the dried knobby shaped rhizome of the plant Zingiber officinale. The Latin name, zingiber, derives from interpretations of the name in Indic languages where ginger was described as “shaped like a deer’s antler (horn)”.  Ginger goes by many names in different languages such as jiang (Chinese), adrak (Hindi), jengibre (Spanish), zenzero (Italian), gingembre (French), zanjabeel (Arabic), and ingwer (German)(1).

Ginger is a 2-4 feet tall slender perennial with grass-like leaves and greenish-yellow flowers. Once the leaves of the plant die, the thick rhizomes, about 6 inches long, are dug up. Ginger is often referred to as a root but this is technically incorrect. Rhizomes are underground stems that grow horizontally underground (and have smaller roots growing from them). 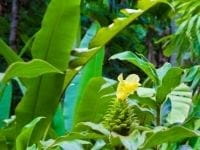 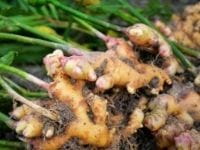 Botanically, ginger is a member of the Zingiberaceae (giner) family.

The Chinese have used ginger for over 5000 years as a digestive aid and anti-nausea remedy. In Traditional Chinese Medicine (TCM), ginger is considered a pungent, dry, warming, yang herb for ailments triggered by cold, damp weather. The Greeks wrapped ginger in bread for use after meals as a digestive aid.  In medieval Europe it was incorporated directly into bread and confections as a digestif. Queen Elizabeth I of England is credited with the invention of the gingerbread man, which became a popular Christmas treat. Ginger was so valued by the Spanish that they established ginger plantations in Jamaica in the 1600’s. “Canada Dry Ginger Ale” was patented in 1907 by Canadian pharmacist John J. McLaughlin, and became a popular beverage in America during prohibition (3,4).

Fresh ginger root is typically light brown on the outside and pale yellow on the inside. Dried ground ginger has a fine texture and is light tan in hue. Crystallized ginger is darker yellow to amber in hue. 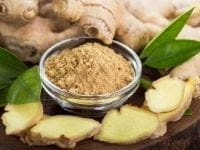 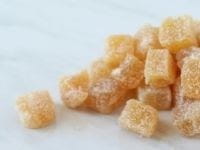 The ginger rhizome contains 1-3% essential oils and the compound "gingerol" is responsible for its pungent/hot sensation.  Dried ginger is generally less spicy than fresh ginger (6).

Ginger is one of the most used spices in the world and comes in numerous forms, including fresh, dried, pickled, preserved, crystallized, candied, and powdered/ground. Ginger, along with green onion and garlic, is considered part of the “holy trinity” of Chinese cooking.  In Thailand, it is an essential ingredient in many curry dishes. In India, ginger is an essential flavor in the vast majority of dishes as well as the popular hot beverage masala chai (milky black tea with aromatic spices). In Japan, pickled ginger (gari) is served with sushi as a palette cleanser.  Ginger tea, prepared by soaking slices of ginger in hot water, with or without tea leaves, is popular throughout Asia (1).  In Western cuisine, ginger is mostly used in sweet applications such as ginger ale, gingerbread, ginger snaps, parkin (a traditional English cake), and speculaas (Dutch spiced shortbread cookies).

Ground ginger (also known as powdered ginger) is readily available in most supermarkets and is used for baking and in curry mixes. Ground ginger is a popular ingredient in apple and pumpkin pies. Fresh ginger can be purchased in the produce section of most supermarkets. Use a vegetable peeler to peel away the outer skin and then grate, chop, or julienne.  Preserved, or candied, ginger can be added to desserts as an ingredient or garnish. Ground ginger tends to be more concentrated in flavor but lacks the pungent heat of fresh ginger.

Did you know that many cultures use large amounts of ginger in their cooking: it is estimated that in India, the average daily consumption is 8 -10 grams of fresh ginger root (7).